To Our Righteous Writers
From Melinda Holman 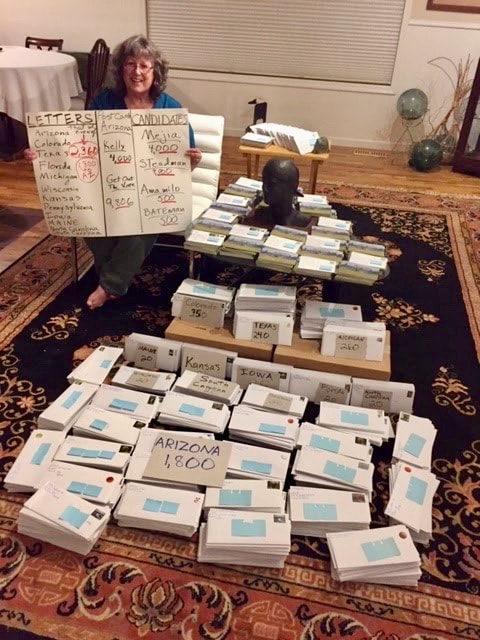 “Amazing”, “incredible” are the words that leap to mind when I look at the work Olympia Indivisible’s righteous writers, their friends and family have done since February 6 when we had our first writing party.  Although the GOTV Team only held five writing parties before Covid19 halted them, we got off to a grand start, writing almost 2,000 Vote Forward letters encouraging people to vote. Thereafter, people signed up and wrote letters from home.  We have no idea how many have been written since.  I did receive more letters to keep.  I have 2,440 letters ready to be mailed on October 17.

The number of postcards written for Washington State campaigns is equally amazing.  Approximately 131 writers wrote 4,000 cards for Carolina Mejia, 4,000 for Michael Steadman, 500 for Sharonda Amamilo and 500 for Jessica Bateman.  Several writers wrote over 200 cards and a few even more, putting their carpal tunnels at risk.  The fact that we couldn’t start until after the June primary puts this effort in the jaw dropping category: 9,000 cards in 3 months.

The extraordinary effort put forth by the GOTV Writing Team made this possible.  Mary Bartholomew, Peggy Dreyfus, Lasha Steinweg, Chas Dreyfus and I did everything from design postcards for one campaign, print them, buy stamps where needed, count and bundle the cards, keep track with a monstrous spreadsheet, DELIVER cards with masks and gloves when people were told to stay home, write instructions, talking points and scripts, donate our personal resources, answer a ton of emails, coordinate with 4 campaigns and generally encourage our writers and each other. The Team wrote quite a few letters and cards themselves, with Mary and her daughter, Laura, leading the way.

Talk about numbers:  The AZ-MI Team, thwarted in their hope to travel to our adopted states to register voters and canvas, instead put energy into writing, phone banking and similar efforts.  Lauren Kirby headed up the Arizona writers with early help from Laura Bartholomew.  Ninety-eight writers wrote 9,806 Get Out the Vote postcards for Arizona, encouraging people to sign up for mail-in ballots and to vote and 78 people wrote 4,000 for Arizona Senate Candidate Mark Kelly.  Lauren persisted doggedly at getting addresses and more addresses from Arizona.

Both the GOTV Writing Team and Lauren coordinated distributing all the cards.  We even tried a hub system where people could pick up their cards closer to home but finally simplified it to Jubilee under Lauren’s direction and my back deck in Olympia.  Some writers worked for more than one campaign so we don’t really know exactly how many unique individuals were involved but it was hard to keep up with their voracious appetite for writing.  We finally this week had to tell people we were out of all cards for all purposes.

I had no idea when we started postcard writing in 2018 what it would become.  My heart is filled with gratitude to all the people who helped that early effort and to the current crew.  We had grand schemes for writing parties and had even trained eight writer-trainers for the parties, but had to switch gears when Covid 19 hit.  The flexibility and dedication of my team helped me keep my focus and energy.  I am so glad to have earned their friendship as many of us in OI have with each other.  In this struggle for our country we have forged bonds that will last longer than this current fray.  We work hard for our country and our strength comes from each other.  My gratitude to you all.