Are You Ready For Ranked-Choice Voting

Show your support for the power and possibility of ranked-choice voting!

SIGN ON to the letter below to the Olympia City Council!
Email your name, as you would like it to appear on the letter to thurstonchapter@fairvotewa.org and include your home address. Share this with your friends and neighbors. All are welcome to sign.

Your simple act will make a big difference in helping to make ranked choice voting an option in Washington State. Yours in the belief that better elections are possible, Thurston County Chapter of FairVote Washington

Thank you for hosting community forums on racial justice. We are grateful for your commitment to dismantle the immoral legacies of slavery. Here is a concrete step you can take in that direction: pass a resolution in support of  the Local Options bill, HB 1722 and SB 5708, which would amend state law, making ranked choice voting an option in jurisdictions in Washington state, should they so choose.

The potential benefits of ranked-choice voting include lowered costs for elections, increased voter turnout, markedly improved civility in political campaigns, and elected bodies that are more reflective of the electorate by measures of race, class, gender, and political beliefs.

We the undersigned believe a strong democracy encourages public discourse and debate, which is best achieved when elected leaders and parties accurately reflect and represent their electorate in all its diversity, including racial diversity

Voter turnout in “Top Two” primaries is, without exception, significantly lower than the general election and is not reflective of the general electorate. Furthermore, voters are often faced with “strategic voting”whereby they vote to prevent a disfavored candidate from winning instead of casting a vote for their preferred candidate.

Washington jurisdictions are effectively prohibited from adopting ranked-choice voting by state law, which mandates the top-two primary and the use of numbered positions when multiple elected officials represent the same geography.

We ask that the Olympia City Council pass a resolution in support of of the Local Options Bill, HB 1722 and SB 5708.
Send your support for Ranked-Choice Voting by sending your signature to thurstonchapter@fairvotewa.org today! 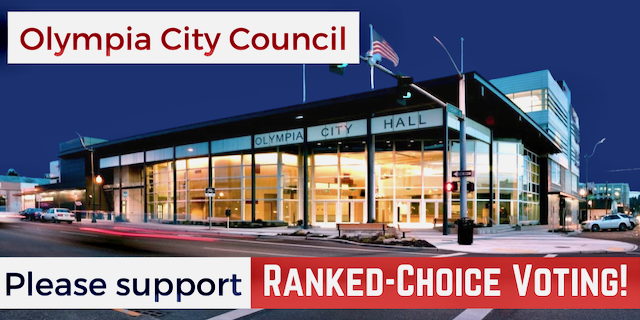