PART 1:  Things To Do to Supercharge Your Facebook Posts.

Post! . . .  a Lot!!!
Over the past couple of years Olympia Indivisible would post sporadically on Facebook, but in early 2020 there was a new infusion of volunteers who created the Facebook sub-team, and who took it as their mission to post something every day. Soon this team took their game to the next level, and now typically posts five or more times a day.

This strategy has several important results. The more you post the more your team members are drawn to the work of finding and posting about a broader range of topics. High volume posting builds name recognition and a sense of common purpose. More Facebook posts create more engagement with your Indivisible membership, which can lead to other engagements, such as phone banking, text banking, and sharing Facebook posts with their social networks to widen the circle of reach.

It brings in new fans/followers for your site, which then connects you with new perspectives and voices. These new Facebook "fans" may then want to plug into your organization. There is also the option to pay a bit of money to promote a FB post to a much wider and more diverse audience, outside of your already created Facebook audience.

Learn to use Facebook’s multiple points of contact.
You have a number of different audiences you want to connect with and you can reach them in different ways. You can have a private Facebook site, aimed at informing and organizing the current members of your Indivisible team. You can also have a public Facebook page aimed at the general public.

You can think of the one as inward-facing and the other as outward-facing. Tailor the postings on each to serve those two different audiences efficiently. It’s important that you be aware of recent criticism of Facebook’s posting practices so you can avoid getting into trouble with the evolving platform.

Build a diverse Facebook team.
Chances are that any group of politically-minded individuals will contain a wide spectrum of levels of technological skill and interest. Think of ways to build collaboration between group members from all along that spectrum.

Group members who think of themselves as having nothing to contribute to social media may actually represent exactly the store of wisdom and ideas that will produce the most compelling stories. Those who have the technical skills (the how of posting) should be joining together with people with deep knowledge of the content (the what of posting).

Don’t worry too much about trolls.
Many people shy away from Facebook and other social media out of concern that they (and their posts) will be targeted by  aggressive critics who will attempt to polarize and undermine political discourse, hiding behind the anonymity that the internet provides. Undeniably there are such people lurking out there, looking for ways to undermine civil debate.

Experience tells us, however, that this fear is generally overblown. There are tools readily available to block individuals and organizations from posting on your site, and to do that in a way that is invisible to the ones being blocked. It is appropriate to be concerned about censorship and free speech issues, but allowing robust debate on your site (a good thing) does not mean that you need to open the doors to bad actors who are aimed at undermining or disrupting free speech.

Give your audiences information.
Post information that is fresh, useful, accurate, and occasionally funny.  Give them something to talk about, and that they might want to share.

You can get inspiration from posts on other like-minded websites. You can also create new content by drawing connections between national news and local perspectives. That will make your posts more interesting to local readers, and it can also draw in a bigger audience of people interested in what’s going on at a personal level in other communities. Personalizing and localizing the news is one of the things Facebook is really good for.

Step away from your screen! Keeping perspective.
Social media platforms are designed to be addictive.  Set reasonable limits on your screen time. Remember, your presence on Facebook is just one of the communication tools you need to use skillfully. Keep your focus on your ultimate goals: political reform and electoral victory.  ​ 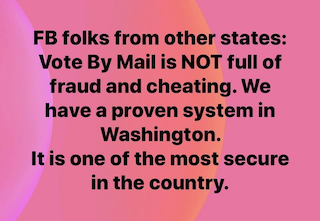 When I joined the Communications Team at Olympia Indivisible, I immediately became fascinated by how these tech-savvy team members were using Facebook to lay the groundwork for the electoral struggle ahead---preparing the tools for victory. Facebook is becoming a valuable part of the social media activist’s toolkit, and will only grow more powerful as more and more Indivisible members and chapters learn how to skilfully use it. And in spite of recent criticism of some of the ways Facebook has been used, it remains an indispensable means of influencing political discourse.


A Facebook Success Story
Here’s an example of how Facebook can amplify an important progressive idea. Just as the national media began to focus on the issue of vote-by-mail rules and their use to suppress voters in under-represented communities, one of our members came across an eye-catching post that encapsulated a persuasive argument for adopting a universal vote-by-mail policy: the state of Washington has had mail-only voting for a number of years with no measurable voter fraud, effectively refuting the trumped up charge that mail-in voting is susceptible to cheating. The message of the post was in bold black letters on a bright pink background. The team member brought the post to a team meeting and put it forward for consideration for reposting, though it only got a lukewarm reception.
​
Nevertheless another team member thought it was at least worth a try. The result was stunning. Since it was first posted it has reached over 40,000 people and has over 200 comments. (Our average posts have been reaching a couple hundred people.) What was it about that post that struck a nerve and galvanized this reaction? And what can we learn from such successes as we craft and distribute these kinds of messages?

Olympia Indivisible has been blessed with a talented group of tech-savvy members who have brought together a critical mass of ideas and practical experience in the service of the Indivisible project.  One particularly important aspect of their work has been learning how to harness the features of the Facebook algorithm that can maximize the spread of important messages to the broadest possible audience.

This kind of knowledge has direct application to any organization aimed at influencing citizens in this age of social media (including organizations which are spreading intentionally misleading political messages). Olympia Indivisible is committed to spreading this strategic knowledge about Facebook. One especially powerful example of this work is ActionSprout.

ActionSprout: Free social media power at your fingertips.
In 2012 a small group of social media dreamers, who had wasted a lot of time complaining about Facebook, realized that recent changes in the Facebook platform opened up rich possibilities for non-profit organizations to make use of social media in ways that had not been possible before.

Under the name “ActionSprout,” these folks developed a series of tools that non-profits could use to further their progressive agendas. By great good fortune, one of the current ActionSprout team members, Amiel Martin, happens to hail from Olympia and has become active in Olympia Indivisible. Along with the Olympia Indivisible team, he has used ActionSprout technology to dramatically expand the reach of our Facebook campaign. These tools are now available nationwide to Indivisible chapters wishing to generate maximum engagement with their members and the broader community.

Among many other features, ActionSprout makes it easy to:
Best of all, ActionSprout is FREE!  They have received a grant that can be used to support the work of particularly important advocacy groups, and Indivisible qualifies as one of those grant-eligible groups.

Here’s an example of a highly effective legislative campaign that used the power of ActionSprout to flip a key seat in the Washington legislature. Rep.Sharon Shewmak used ActionSprout and Facebook to win against conventional expectations. See how she did it: ActionSprout Case Study: An Upset Victory for Rep. Sharon Shewmake.